Again a day of travel, although it did not include flying, just bussing. Today we are travelling from Hue to Hoi An. First we went to the outskirts of Hue to visit something we simply did not get to yesterday, because of the busyness. That is the mausoleum of one of the emperors of Vietnam. It is so weird, cause people have build an amazing park with a pond, a teahouse and three big buildings plus a few huuge objects in three years. This was all meant to be the last resting place of the body of this particular emperor, but his body is in fact not there at all.

The reason for this is, if I listened well enough, the war. The people that actually buried his real body somewhere secret (because they were afraid of him getting graverobbed) were all killed during a war or fight. Isn’t it extremely sad for both the hardworking people (10.000…) as himself, as obviously not only does he not rest in peace where he wanted (and what he figured out during his life, very detailed), but his body could be practically anywhere and might never be found… 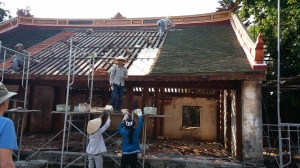 The above picture I did not just shoot to show how much maintenance there is done to these temples, and that they still make temples even though they seem to be so authentic 😉 But also to show how unsafe people work here. I have even seen a few people that were just standing on a 12 meter high roof, bare feet, no helmets on.. That is soo tricky!

The picture above is a unicorn, which to me is very funny as I am PsychoUnicorn. Even though in this country you specifically see a lot of dragons, dogs and Buddha’s, sometimes there are cats, unicorns, water buffalo’s and other special creatures in the art work. Especially the Chinese zodiac is very popular here, so I have already bought some ‘cat’-items as I am a cat (which sometimes is a rabbit, weird!). Anything for look you know, I still cannot tell you about this, but I do need it at the moment!

On this specific visit to this mausoleum I got reminded why it is a bit annoying sometimes to be on a group trip. Sure it is nice to not have to think about anything, it can be rather frustrating to visit a place and not have enough time to do fun stuff. For example the throne you see on the picture, it is beautiful (it is a replica I think) and you could have your picture taken dressed up and everything. I would have loved to do that, but we had no time!

That was too bad, but indeed it was a pretty busy day. We have watched a lot of beautiful art in that mausoleum, of which the picture above is a very nice example. Vietnamese people use anything to make mosaics, for example Heineken beer bottles, or this blue Chinese porcelain which is lovely. 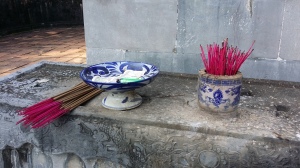 It really is a very beautiful place so I think the emperor did an excellent job picking this place out. The entrance fee is very low, so I would recommend you to go. There is an adorable tea house in the middle of the place and obviously you should get your picture taken on the throne. Please do just yourself or the family, and not the option to have two Vietnamese ladies in the picture as servants ! :O

After this nice visit we went to this little station where ladies made the incense sticks, which were really expensive! Please do buy them, because they are amazing and they are soo much better than that factory crap we buy in our own countries. I made the mistake of not buying them because I thought they were too expensive, and I really regret it. I will definitely look for some of these real incense sticks during the rest of my trip. 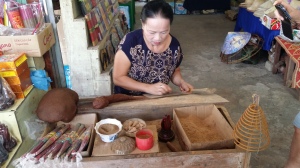 It is so easy how they make these sticks, I thought it was very complicated but it was just adding water and something else to cinnamon, and put that on a stick! May be I should try it at home! 😉 When we drove away we went to this high mountain in the area that was hit by Agent Orange pretty badly back in the Vietnam/America war. I must say it is not extremely clear to me which places got hit, because nature is starting to grow again, but you do see a lot of war symbols all over the country (the one below isn’t by the way, that is just a communist poster that you see everywhere). 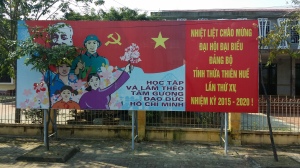 The below picture is definitely a war thing. It is a post on the mountain area where the country is the smallest. You can almost see both seasides when you stare into the distance. It is really crazy to realise how this war must have been back then. Those American guys were dropped into this jungle land, fighting who knows what, bombing all these beautiful cultural expressions. It must have been so frightening to both the Americans and the Vietnamese people.

Vietnam really is a country of war, even though they are not specifically such warlords themselves. There were a lot of countries wanting their land, as they obviously have a very interesting location with a lot of coast. It is pretty remarkable how the Vietnamese stuck together and still have their own country.

As it is winter right now in Vietnam, the pictures are not very sunny and very white. My phone does not really handle light well (thanks Samsung!) and that is why some things look less beautiful on pictures than in real life. You should just go and experience this yourself I guess 😉 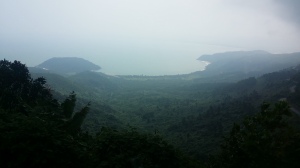 After the mountains we drove to this museum where they had all these ancient artifacts on display. They were made by sandstone and found underground in the Vietnamese jungle, and they seemed to belong to temples. Many of it was broken, but it was still nice to look at it. It is not a museum where you’d stick around for hours, but half an hour is just about right to experience it all. I am not a big fan of museums in Asia, as on my trips they often took me to the museums I would not have chosen myself. Still it is good to take in some history though.

The place we visited after the museum though, oooh my god it was so gorgeous. There was this marble mountain that I thought we would only drive up to, take a pic and then leave, but we could not even drive up it, we would go up by elevator and look around ourselves.

Thank god we did, because we made a beautiful walk through these mountains full of Buddha’s. Super huge ones, smaller ones, extremely white ones; it was one of the highlights of this holiday to me.

Especially a Buddha that sadly I could not take a good pic of with my phone (but I did with the camera too so it should be there!), it was in this cave and it was huge, sitting way up high. It was so special, and it was so nice and cold in that cave, with incense sticks everywhere, offerings, flowers, it was amazing.

This is one of the reasons I wanted to go to Vietnam so badly, around 60 per cent of the people are Buddist and that shows. They are very kind and loving, if you walk on the streets you will see that it is a case of ‘live and let live’, they honk a lot, but they don’t honk AT you, they honk FOR you, just to let the persons in front of them know: be careful, I am coming and I do not want to crash into you! 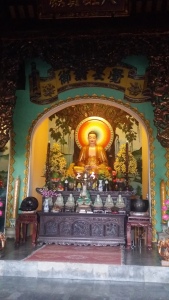 And also, for a country that has had so many problems with white people in the past, they are always so kind. And I know that is what you do when you want to get people’s money, but believe me, there have been so many people on this trip already that just do the extra mile, even if they know there is no money that will come with it. It is amazing, and I love it here. 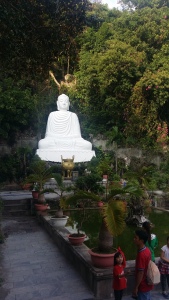 So, after this gorgeous temple that I will definitely remember for a long time, we finally reached the hotel in Hoi An. It is an amazing hotel called Silk Village, just new per November 2015 and it is soo cool. In Hoi An they have these lanterns everywhere, and this hotel also has these very atmospheric lanterns to light the place. There is also a very beautiful swimming pool with the exact right temperature. Very spacious rooms, lovely.

In the evening we went to dinner to this place called Cargo Club, which was kind of fancy but not too fancy, and the food was really good. Especially the desserts were excellent, and I would highly recommend this place if you would travel to Hoi An.